Here is another interview from my book tour.  It originally appeared on the site “The Wonderings of One Person.”  There is still time to enter the give away for a copy of the book and an Amazon gift card. Check it out at:  http://thewonderingsofoneperson.wordpress.com/2014/02/06/apocalipstick-by-lisa-acerbo-book-tour/

What was the inspiration for your story?

I love zombie movies and vampire books such as the Chicagoland vampire series. Reading some of the recent book releases in the genre such as World War Z and watching movies like Shaun of the Dead sparked the desire to try my hand at writing my own zombie novel.  I kept wondering what would happen if vampires had to fight zombies? The answer is in Apocalipstick.

What kept you going throughout the writing process?

I worked on the dissertation for my EdD at the same time as I wrote Apocalipstick.  It was a long, three-year process. There were times academic writing started to drive me crazy, and at that point I would turn to creative writing for a while.  It helped.  When writers’ block overwhelmed me, I could turn back to research.  Somehow it worked.

Who is your most meaningful character and why?

Jenna, the main character, is the most meaningful. She lives in this crazy, deadly post-apocalyptic world overrun with stalkers, another name for zombies. I love Jenna, the hero of the story.  She is tough, smart and sassy and has this innate ability to stay alive in the craziest situations. What more could you want?  I’m not sure if she is all that likable; a zombie apocalypse can cause some people to be on edge and grumpy, but she is fiercely loyal to her friends, and that counts for a whole lot when you fight the evil undead.

Can we expect to hear more from these characters in the near future?

Absolutely. Apocalipstick was my first book, but book two is slowly coming together.  Jenna and Caleb leave the safety of the inn and their travels resemble the traditional quest of the mythological heroes brought to light by Joseph Campbell. There are also many unexpected twists for some of the minor characters in the first book. Someone rises from the dead, but not as a zombie.

While working on my first book, I was already planning the next one and thinking about the changes and developments that would happen to Jenna and Caleb. If you have read the first one, you know it ends with a cliff-hanger, and that is because I could not wait to start writing the sequel. Now that I am almost done with the second book, much has changed from the original plans I made for Jenna, Caleb, and other characters.

How has this story touched your life?

The people I meet because of writing Apocalipstick have changed my life. I’ve learned so much and appreciate all the support from Eternal Press, the company that published the book, other authors, and the people at conventions.  There has been so much kindness from book reviewers, fans, and friends.

What motivated you to start writing?

I majored in English during college, thinking that I wanted to become a journalist, but instead became an English teacher. While a full time teacher now, I have also continued to write and publish. Before turning to fiction, my articles appeared in the Connecticut Post, Trumbull Patch and Hollywood Scriptwriter. Writing a novel was on my bucket list, so now that I have completed the goal, I am changing my bucket list entry to writing a series of books. 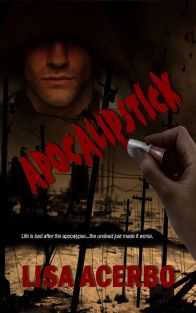